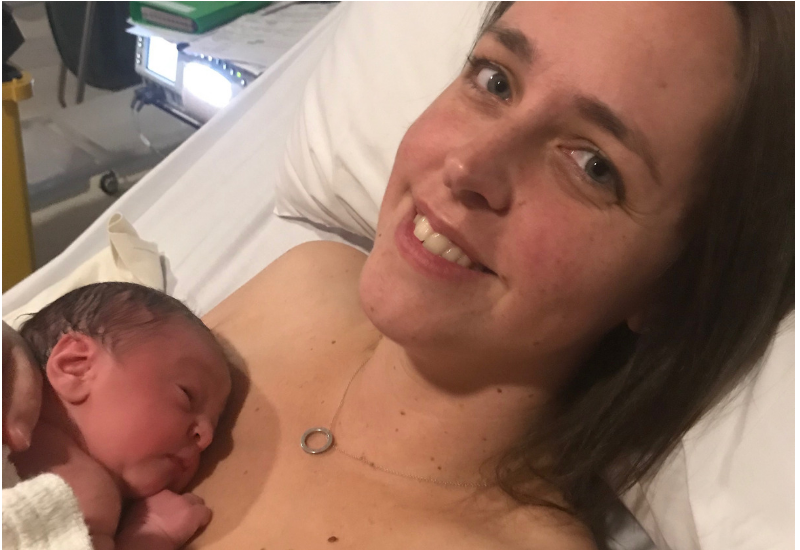 After a traumatic first birth, Katrina tells her story of her healing second birth. Using the techniques of hypnobirthing Katrina was able to have a calm, quick, beautiful natural birth.

Up until the Peaceful Birthing course I was planning on an epidural, so I definitely have Simone to thank for changing my mindset and empowering me to trust myself and my body. It was just such an amazing experience, it never occurred to me to ask for drugs.

The night before Lyla’s birth I knew something was different. All of a sudden, the almost finished babies room really bothered me, and although I was exhausted I just had to finish it! After finally going to bed, I didn’t sleep very well – I just felt uncomfortable and a bit off. Early hours of the next morning, I began to feel subtle contractions that were about 10 minutes apart but very manageable. Brad left for work, and my daughter Eva came into my room and we just cuddled in bed. At this point it was about 7am, I decided to call Brad and asked him to come home, and after he arrived home we had some family time as I was thinking this might be the last time we spend quality time just the three of us! We dropped Eva to daycare, then Brad and I went for a walk and coffee as I realised the contractions intensified when I was walking and would stop when I sat down. Once we got home around midday, I relaxed on the couch and had some lunch thinking I’d need energy for when I went into labour ‘properly’ later in the day. After a couple of hours the contractions started to come back, not too intense, but by 4pm they intensified enough that I couldn’t watch TV anymore. Brad started loading the car, called the hospital and rang Mum to make sure she could pick up Eva.

“I put some chilled out music on and was able focus on my breathing through each contraction which really helped. What really surprised me was how calm I was between contractions. I wasn’t anxious, or fearful. Compared to my first birth where I was completely overwhelmed and just didn’t cope, this time I felt in control. I credit my birth preparation for the ability to trust in my body to birth my baby. I had support from the hospital psychologist (to deal with fear around the first birth), did weekly prenatal yoga and the Peaceful Birthing course which teaches Hypnobirthing techniques. I was focused on deep breathing, remembering to keep my jaw relaxed and the tension out of my body”

I stayed relaxed and chilled, everything was perfectly calm. I remember thinking to myself, we should probably make a move to the hospital but I was so in my zone and I wasn’t really communicating. For some irrational reason, I decided I needed to see Eva before going to the hospital. So Mum brought her right over. I had the TENS machine on leaning on my fitball focusing on my breathing, and it was really lovely. Mum had my nephew as well, and they were rubbing my head and giving me cuddles, and between contractions Eva would say ‘Everything is going to be ok Mum’ and ‘I love you Mum’ and my nephew copied her. This was probably only 20 minutes and I realised we needed to get going. 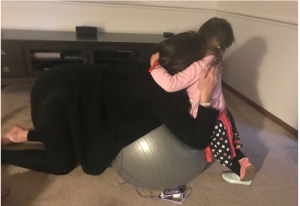 As we were walking out the door, my waters broke so I had to clean myself up, which happened very slowly as the contractions were so close. Finally in the car, I felt the pressure in my bottom so I told Brad ‘I think the baby is coming’ but I was adamant this baby wasn’t coming in the car so I think my body held back. So eyes closed, still using TENs machine, I told myself over and over the baby wasn’t coming in the car. As soon as the midwife saw me when we arrived at the hospital, there was no questions asked or physical assessment done, they wheeled me straight into the birthing suite. Within 2 contractions of being on the bed, I felt my body involuntarily pushing (also known as fetal ejection reflex), it was just so strong and primal. So I breathed baby down and went with it. The midwives never told me to push, and encouraged me to get into whatever position I felt comfortable. So I laid on my side, with Brad holding up my leg. In between the contractions they were peeling my clothes off and went with my natural instinct. Lyla was born in one contraction, head and body! I was so relieved, and happy that the baby was here. Filled with endorphins and oxytocin I was so proud of myself and kept saying ‘I did it, I did it!!’  It was just such an amazing experience, it never occurred to me to ask for drugs. A little while later we checked the sex of the baby, and it was another girl! We were convinced it was a boy, so we were very pleasantly surprised we had a sister for Eva. We delayed the cord clamping, and I planned to deliver the placenta naturally, but after quite a while with Lyla having skin to skin on my chest, it didn’t come out, not even after sitting on the toilet. I eventually had the syntocinin shot and not too long later I birthed the placenta.

Then it was time to soak up the new baby snuggle hormones that had truly kicked in, and the 3 of us lay undisturbed for hours.