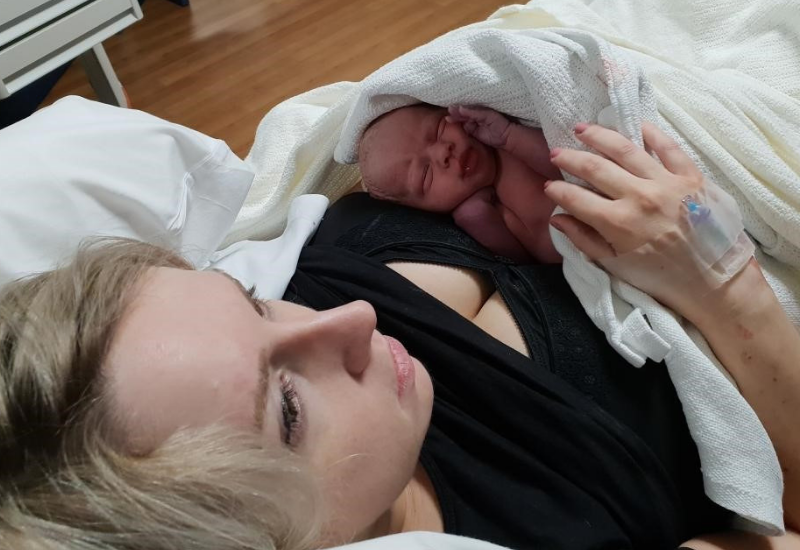 “My husband  was amazing, keeping me calm and prompting me to do the hypnobirthing breathing. I finally began to let go. At that point my body completely took over, and I felt a leg pop out! Another two surges and next thing they were holding a baby up to me.”

I started losing my plug on the Saturday at 35 weeks 6 days, and the midwife said not to worry it will probably regenerate but to keep an eye out for tightenings or if my waters break. So we decided to keep our dinner plans, but after a short time we decided to go home. I slept great that night, but woke to a weird pressure, it wasn’t painful, and it was random so I spent much of the day in and out of bed. As I knew she was breech, we were still deciding whether to have an ECV (external cephalic version) so I thought the pressure was just her pushing on my bladder. On the Monday I was talking to my physio about what I could do regarding my prolapse and the possibility of it making things worse with a natural birth, or whether we should have an elective caesarean. I was quite uncomfortable and felt heavy, but nothing that made me think I was in labour. Later that night (Christmas Eve) we were out and again decided to come home early, and I didn’t sleep very well with the same pressure and having to go to the toilet every hour or so. The next morning (Christmas Day!) I was still worried it was my prolapse, but I was trying to hold it together to enjoy the morning opening presents with our daughter. After we got through the presents, I decided to go into the hospital to get checked. So my Dad drove me so Adam could stay with our daughter, we didn’t want to spoil her day! On the way I realised the pressure was more consistent, every 3 or 4 minutes. I got the wheelchair to the maternity ward, and when we arrive the midwife asked if I wanted to go to the toilet, and I said yes.

“The midwife then asked if I needed to push, and my response was ‘’No, I’m not in labour why would I need to push?”. Then when I was on the toilet, I made a loud involuntary pushing noise. The midwife yelled out asking “What’s going on in there?” and whisked me onto the bed to do an internal examination. She then hit the emergency assist button, I was fully dilated and the midwife could feel a foot!!”

It was 8.50am, Dad had gone to take the wheelchair back, and the room was filling with people so I began to panic. I didn’t want to push because of my prolapse, and her being breech. Another midwife also performed an internal examination, and this was quite invasive, presumably she was trying to ascertain babys position. This took 3-4 minutes and it was so uncomfortable, so I told her she needed to stop. By now Dad was back so I asked him to come back in, I needed someone there with me! They were trying to get ready for an emergency caesarean, trying to get me to sign forms and insert the canula, and I was trying to remember my breathing but it was so intense as it was so quick.

“I was trying not to push, I even had my legs closed, but my body just took over. It was an incredible feeling.”

My waters broke in an explosive way, everyone had to stand back, and then thank goodness my husband finally turned up. He was amazing, keeping me calm and prompting me to do the hypnobirthing breathing, and I finally began to let go. At that point my body completely took over, and I felt a leg pop out! Another 2 surges and next thing they were holding a baby up to me. It was 9.23am. I couldn’t believe she was out that quick! I had a minor tear, no stitches. She was a footling breech which is when she is feet first, and she did everything she needed to do to come out safely.

“She was named a Christmas miracle by the staff as they hadn’t seen a natural footling breech birth before. I felt so supported by the staff, one of the midwives in particular who was a childbirth educator and she took charge. It helped me feel safe and to stay calm.”

My Dad had all the staff teary as he was so emotional, he was even hugging the ward clerk! All that day the midwives were asking me about my incredible natural breech birth, I felt like a bit of a Rockstar! I’ve never been prouder of myself. I think I was in shock given it was so early and so quick. Although I didn’t get delayed cord clamping likely because of her being breech, I did have my placenta encapsulated and there wasn’t much blood left which was a great outcome. She fed straight away, and I felt so completely normal straight after the birth.