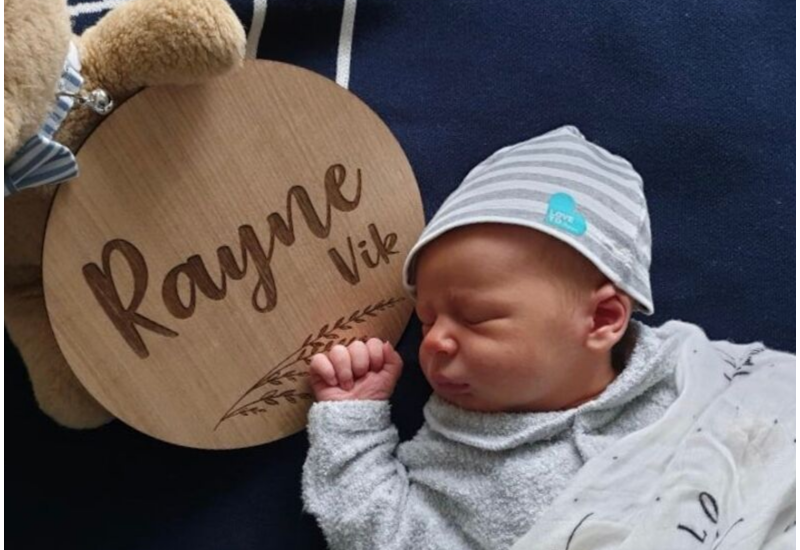 “I had prepared my mind using the hypnosis tracks and affirmation track in pregnancy so I trusted that I could deliver my baby naturally and the thoughts of needing a caesarean had long passed, I was going to do this my way!”

At 12 days over our estimated due date Jay and I left our house knowing that when we returned it would be as a family of three, being induced was never on the cards for me, I was told throughout my pregnancy that our baby was engaged early and would likely arrive on his own before 40 weeks gestation. Nevertheless, I felt at peace with the decision to be induced knowing that I would soon meet my boy and that I had done everything possible to help things along naturally. Having completed the Hypnobirthing Australia course in my second trimester I knew that coming to terms with whatever path my labour and birth might take was incredibly important and would go along way in keeping my baby and I calm during the course of the day, we also had a lovely doula to help guide us through the unknown.

At 41 weeks I declined a stretch and sweep and decided to try acupuncture instead, I did three sessions before our induction date which helped to soften my cervix. I declined the induction gel and instead opted for the balloon catheter, however, the day prior to our scheduled induction I saw my midwife (who was very supportive of our birth plan) who suggested that I now consider the stretch and sweep to give me one last chance at going into labour naturally, I agreed, unfortunately to no avail. Positively, we then realised that I was dilated enough at that point to have my membranes ruptured without the use of a gel or balloon catheter (which at this stage would have just fallen out).

Friday morning arrived and we headed to the hospital, my waters were broken at about 8:30AM and after two hours I had still not progressed on my own, as such the syntocinon drip was administered at a low dose and things started to move along, slowly. The midwives were fantastic, they were very supportive of my wish to be as mobile as possible and although the drip restricted movement they helped me move around the room as much as they could. At around 1PM my obstetrician came in and made a comment about the fact that I was ‘too happy’ which did dampen the mood, it was disappointing as I knew instinctually that we had a long way to go and I was trying to get my head around that.

At 3PM I accepted an examination by the midwifes and although I’d originally requested not to know the number, I needed to prepare myself mentally. I was ‘only 2 centimetres’ so I needed to regroup, I’d been calm and happy prior to that but it was difficult to hear and the thought on a caesarean dawned on me, with the support of Jay and Jacqui I gathered my thoughts and kept on my path

“I mainly used my breathing as a relaxation tool to help keep me calm, and I was able to return to this state between surges relatively well in the early hours of my labour. Even the midwife commented on my breathing, and none of them commented on pain relief as per my birth preference. I listened to a couple of the tracks, played my labour playlist and had candles and essential oils, for a sterile hospital room, it was a calm relaxing space. My baby stayed so calm during the labour, I credit this to the use of hypnobirthing techniques during my pregnancy, I made him to comfortable in there!”

He turned posterior at some point during the labour so most of the uncomfortable sensations were in my back. By 7PM (around 7 hours later) I was 8 cm and in the throes of labour. I was coping well and by this time was on my side on the bed using a peanut ball,

“I had prepared my mind using the hypnosis tracks and affirmation track in pregnancy so I trusted that I could deliver my baby naturally and the thoughts of needing a caesarean had long passed, I was going to do this my way!!”

Oddly enough my obstetrician came in at this time and encouraged pain relief, commenting that I still had some time to go, I told him firmly that I was okay and that I would use the gas if need be. I did use the gas not long after that as knew that this didn’t cross the placenta and was lucky enough to feel well during the use of it. Although I don’t think I got ‘pain’ relief from it, it did help regulate my breathing and was a distraction. I did lose my focus a couple of times, at which point Jay was my guiding path, as was my doula Jacqui, they kept me on track and supported my preference of not having pain medication unless I really felt I needed it.

At around 8PM the midwife suggested it was a good time for a position change so I leaned over the bedhead on all fours and things really ramped up. The surges became more intense, and lower down. For this first time his heart rate did drop, and this was probably when he was low in my birth canal so I got rid of the gas to help focused on guiding my baby down. My body completely took over, it was the most incredible feeling. His head came out, and I’d asked if I could receive him and as I was in the right position I could. My midwife asked if I was ready to catch my baby, I came out of my trance, and guided by my midwife and myself he entered the world. He kind of fell out!! His cord was wrapped around his arm and neck, so the midwife untangled him and placed him onto my chest.

“The first thing I said to Jay was ‘I did it! He came out naturally!”

We had over an hour together and then I was wheeled off to theatre to repair my tear. My baby was given to Jay and he gave him his first feed of colostrum that I had expressed during pregnancy. I decided to get the syntocinin shot to birth the placenta as the midwives were keen to get the placenta out.

We had decided to do a lotus birth where the cord remains attached to the placenta. The midwives hadn’t done this before and were at a bit of a loss at doing ‘nothing’, Jay had to coach them in our preference! We put the placenta in the kidney dish and made sure the placenta was intact. We cleaned and dried the placenta and covered it in salt, lavender and rose petals daily and wrapped it in a bag that I had made (there was no smell, in fact, it smelt florally if anything!), when it naturally came away from our son we planted it with a tree in the yard.