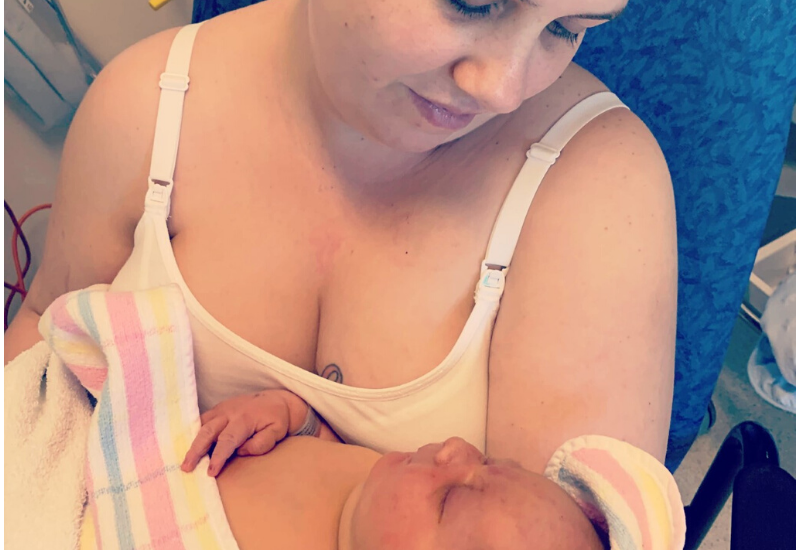 “Craig put the tracks on, the oil diffuser and I focused on my breathing. This was the biggest help for me through the entire labour. I wouldn’t have gotten so far on my own without these techniques. It was something to focus on, and it calmed my mind”

I’d love to say I enjoyed being pregnant, but the reality for me was that it was primarily filled with fear. I had several episodes of bleeding in the first trimester, and then when that stopped I was able to catch my breath for a few weeks, only to have my cervix start shortening at 18 weeks. So we prepared ourselves for an early entry for our son, which didn’t happen, so it was quite ironic that the hospital recommended induction at 39 weeks due to a suspected big baby!

“Having done the Hypnobirthing Australia class, we knew we didn’t want to be induced. I had a stretch and sweep at 38 weeks instead, which just agitated my uterus. Even though I initially I agreed to have the induction gel at 39 weeks, the day before I decided to let my baby decide when he wanted to be born, so we reschedule to have it done at 40 weeks”

Instead, we decided on another stretch and sweep. From then, I bounced on the birth ball, walked, listened to my hypnobirthing tracks and used my essential oils. Then, at 39+5, I woke up feeling sensations that were different to the cramping I’d felt before. I just felt different, and I lost my show throughout the day. The sensations began increasing and had some consistency by lunchtime, so I asked Craig to come home, and called my sister (birth support person) to let her know what was going on. Craig and I laboured peacefully at home the entire day, until I passed a blood clot at 9pm so we decided to go into the hospital, and then the surges began to intensify. After agreeing to a vaginal examination, I was still at 4cm (I had been for the past week) and entered the birth pool around 11pm. Craig put the tracks on, the oil diffuser and I focused on my breathing. This was the biggest help for me through the entire labour. I wouldn’t have gotten so far on my own without these techniques. It was something to focus on, and it calmed my mind. My sister arrived about 4am, it was great to know she knew our preferences and could talk with the staff. I felt really good, and at one point we thought I was in transition, but the midwife couldn’t see any indication after visually checking so I stood up to get gravity to help. It was then that the hind waters broke, and unfortunately there was meconium present. The hospital policy was to have constant monitoring, and after discussing this together with Simone and Craig we agreed.

“I then moved into the shower wearing the waterproof CTG monitor, swaying my hips. When things got really intense, Craig would come into the shower and hug me through a surge, I can’t believe how much that helped. Having him there was just amazing, he was my rock!”

By about 7am, we agreed to another examination to see where we were at. Being on my back was so uncomfortable, and to then to be told I was ‘only a 6cm’ was devastating. Our birthing preferences stated not to be told a number, and I really took this hard mentally. It took a good half an hour to get back into a positive headspace. The OB offered to break my waters, which we declined. I was then able to manage pretty well, although I was getting quite tired. It was distracting having the CTG monitor beeping, and having to make sure it was connecting though. We agreed to another check at 10am due to the meconium. This time my sister asked the OB to give an indication of progress and not a number. Again, it was very uncomfortable lying down, and we were told I had not progressed any further. So we decided to have my waters broken to see if this would speed things up, and to put the clip on the baby’s head so we didn’t have to concentrate on the monitor.

“The process wasn’t painful, but the intensity of the labour did increase and I was finding it difficult to remain calm so I decided to try some gas. This worked so well! I had my birthing mojo back, and I was so happy it wasn’t affecting the baby. I was able to refocus on my breathing, and did this in the shower on the ball. I was calm, content, and could chat at times between surges!”

After a few hours, again the tiredness set it and I started to lose focus. At 1pm we agreed to another examination, and my heart sank when again there was no progress. We discussed the possibility of an epidural, and after a few minutes alone to chat about this I decided it was my best way forward. We thought if I could have a few hours rest, my body might relax enough to do what it needed to do. So that’s what I did. Craig and Simone were able to have some lunch and rest too, and I slept for an hour or so, and felt much better. A few hours later the OB came back to check on our progress. I still had not progressed, and my cervix had begun to swell.

“The OB recommended a caesarean. Although I was upset, I knew that I’d done everything I could possibly do to help him come naturally and that just wasn’t our path. After again discussing this alone with Craig and Simone, we agreed. I’m so grateful that I didn’t feel pressured at all, it was all my decision and I felt supported”

There were twins being born via caesearean who were in before me, so it was still a few hours before I was wheeled down to theatre. I’m not sure what other people’s experiences are of caesareans, but I didn’t like the sensations, I had the shakes, I was sweating and my baby needed to be taken out with forceps so my whole body shook! I was given some oxygen which really helped.

“But it was all worth it when I finally got to meet by boy! I just balled my eyes out. That moment when you look into your baby’s eyes for the first time is just magical”