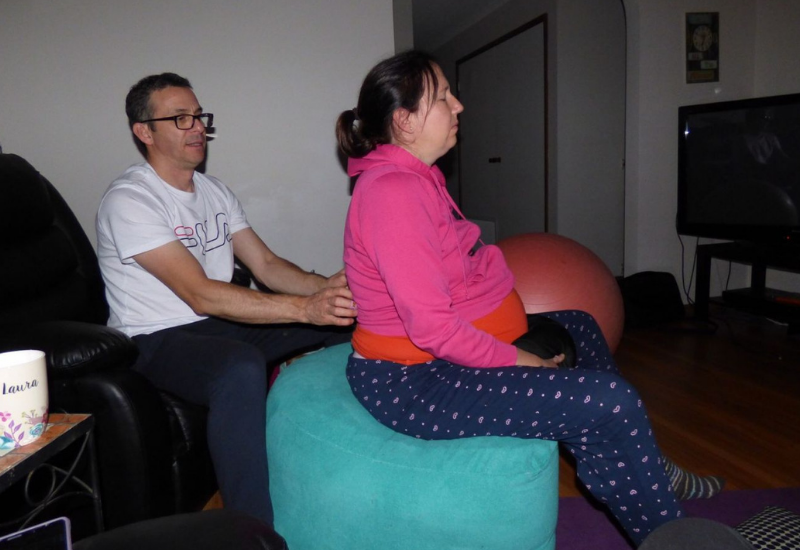 ” I’m so appreciative that Daniel and I were equipped with the Hypnobirthing Australia education and techniques, I feel for parents going into birth blind, it’s a beautiful but uniquely intense experience that’s for sure! “

As with my first labour, early signs began 3 weeks our baby was born, where I’d often feel surge like sensations that petered out. I was keen to get things started as I was feeling pressure from the hospital to be induced due to my age, so we tried natural induction techniques. Then late on the Wednesday evening I finally had a show, I was beyond excited!

” I was happy and comfortable at home labouring calmly listening to the hypnobirthing tracks, concentrating on my breathing and bouncing on the birth ball. I called my Doula who also joined us. I felt the need to sway my hips during a surge, so I was always either on all fours or on the birth ball. We also used the rebozo technique to encourage baby to be in the right position, and to help me relax.”

After quite a few hours, I began to feel pressure in my bottom, and being my second labour, I had been told it would likely be quicker so we decided to make our way to the hospital. I listened to the hypnobirthing tracks in the car, and remained focused on my breathing. When we arrived at the hospital, despite my birth preferencing stating I didn’t want vaginal examinations, I accepted as I wanted a waterbirth and hospital policy stated I had to be at least 5cm. I used the ‘bubble of comfort’ technique to help remain calm during the examination, and I was now listening to the hypnobirthing tracks on my headphones to reduce the outside stimulation. I was shocked and completely disheartened to find out I was ‘only 1cm’. So we decided to head back home, but first the hospital wanted to check we were both ok. I needed have the CTG to monitor babies heart rate, and I was able to do this while I was bouncing on the fitball and looking at the vision board I’d created. After half an hour I was again very disheartened to find it hadn’t been recording, so I had to stay there for a while longer, I was able to lie on my side but I was still incredibly uncomfortable so I did my best to remain calm by visualising a balloon expanding in my stomach, and then it going down on my exhalations. Eventually we left for home, via Hungry Jacks as there was very little food in the house (we’d been limiting our trips to the shops because of the corona virus and were due to go the next day). We text our doula to see if she wanted anything, and we’d already left when we got the response and although I preferred to go directly home, my husband thought we’d better go back to get her food, so that’s what we did.

“This situation also seemed to veer my calm mind off track, so when we got home I got straight into the bath and listened to surge of the sea, which allowed me to g etback into a positive headspace.”

My husband went for a rest, and the doula came back and was somewhere in the house at this point. After a few hours, I got out of the bath and moved to the bed for a rest as I was getting really tired by this point. Daniel did some light touch and massage which was really lovely, I was even able to sleep between surges. At about 5.30am the surges really intensified so we decided to return to the hospital. As with the previous trip to the hospital, I was told I needed a vaginal examination if I wanted a water birth. So again I agreed, and this time I was at 4cm, and another CTG while I was on the birth ball swaying through the surges. At this time, there was some confusion as to whether I could even have a bath as there was another person in ‘line’ before me. Turns out the super full moon made for a busy maternity ward!

“About 10 minutes after being told I was 4cm, I felt the urge to bear down. More confusion for the midwives as they said they needed to make sure I was fully dilated before I could push. But my body was taking over!”

I felt the urge to pass my bowels, so I sat on the toilet and after that the midwife suggested I feel for the head, and he was crowning!! Obviously it was too late for the bath, so I was on all fours leaning over a birth ball, using gravity as much as I could in a position that felt most comfortable.

“Although I wanted to quietly breathe my baby out, I was making primal noises as that felt instinctually right. I did have some gas at this point to try to slow things down, which it did, the head would start to come out, then retract back. I remember at this point I heard one midwife say to another ‘no, her birth plan said she’d rather tear than have an episiotomy’, I’m so grateful we’d written a plan, and that they had supported my wishes, as I only had a small tear that didn’t require stitches so otherwise I would have ended up with episiotomy stiches.”

Once I birthed the head, I was able to revert back to gently breathing him out. There was tears from both of us when he was finally lifted onto my chest for our first skin to skin! He attached to the breast right away, which I think helped birth the placenta which came out within 10 minutes. We spent the next 6 hours snuggling in bed, then we were both discharged to go home.

“I’m so proud of myself, and overall how the birth went. I feel if I didn’t rest in bed things would have gone quicker, and although I’m disappointed I didn’t get a waterbirth, I am grateful that the current environment dealing with the corona virus really didn’t impact on our experience. I’m so appreciative Daniel and I were equipped with the Hypnobirthing Australia education and techniques, I feel for parent’s going in blind, it’s a beautiful but uniquely intense experience that’s for sure!”