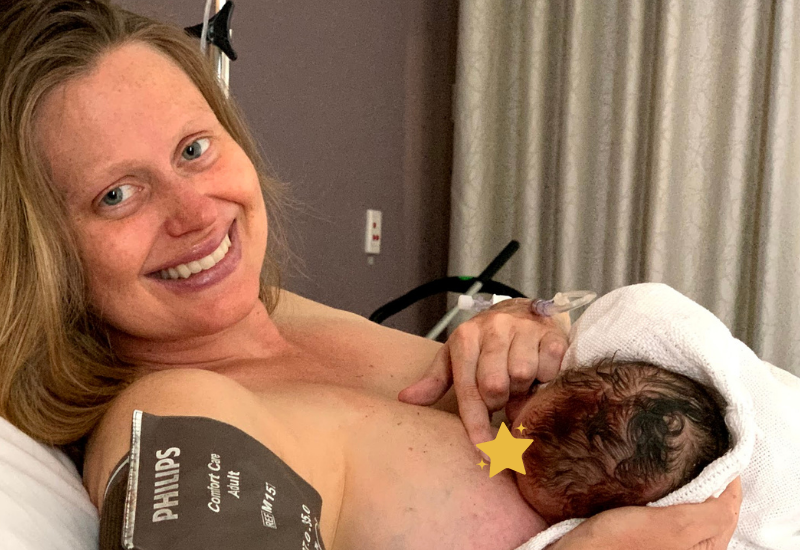 ” Meeting our daughter for the first time was just incredible. My heart just burst with pure bliss! One of the biggest words of wisdom I have for other women would be that when you work with your body and your breathing, you can be so much more present. When you have fear, you are transported out of the moment. So, I can honestly say that I was really present, and in the zone during the birth of my daughter. I felt like there was a deeper presence helping me through the birthing process! “

On the Thursday before our due date, I had a chiropractic appointment, and was yet to have any signs of baby coming. I was adamant she was going to be late! But later that night I had a bit of a show, and a few period pain type feelings, however this subsided and I went to sleep. This repeated the next 2 nights, only to wake in the morning to no further progress. I was able to get enough sleep that I wasn’t exhausted, but I was emotionally tired from trying to analyse what was going on. Then on the Sunday night I lied on the couch as I felt like I was going to get up and down all night. And that’s exactly what happened! Every 15 minutes I was having tightening’s, so I’d sleep for 5 or 10 minutes then I’d get up on all four’s over the birth ball through the surge. The sensations were uncomfortable but not painful. This continued into the next day, and my beautiful doula Jules came to see how I was going (Monday).

” We had our shared care GP appointment that morning, and the GP said that the baby was definitely coming, sooner rather than later. She advised us to go to the hospital to get babies position checked given the prolonged labour, however our doula advised us, if possible, not to go as there is a risk that they might persuade me to stay. So although I fancied getting baby’s positioning checked so we could work with that (my double is trained in spinning babies), my gorgeous husband gently guided me to go home and I’m so glad he did. We would’ve probably been offered to ‘rush things along.’ I was so keen to keep to my body’s natural rhythms as much as possible.”

By this point I was feeling exhausted so the thought of going to hospital was too much. Our doula came back that night to check in and it helped greatly to lift my spirits, and also gave me some positional tips to help bubs move down.

Her recommendation was to try to get sleep, if not have a shower and go with it. I lied in bed at 10pm, and was up again by 10.15pm! So I got into the shower, and I just knew this was happening. Jules had said was until surges were 3 minutes apart, however at 5 minutes apart I told Quentin I wanted to go to the hospital, and he again subtly encouraged me to stay. Once the surges were at 4 minutes apart, I said to him ‘take me to the f*cking hospital’. Ha ha! I never speak to my husband (or anyone for that matter) like that… but something came over me and I.WAS.READY.TO.GET.TO.THE.HOSPITAL! 😉

It was about 4am and I my instincts told me it was time to go. Once I got into the front seat of the car a surge came on. We were waiting for the garage door to open and I frantically scrambled to get in the back of the car on all four’s, no amount of money could have persuaded me to sit in the front seat! On a side note, a funny thing happened on the way to the hospital. A car pulled up next to us at the lights full of young men, music blaring, clearly having enjoyed their night out, while I was in the back seat of the car making all sort of weird noises…. Both up at 4am but for very different reasons! I was completely unaware but Quentin recalled the story later and we had a good giggle!

Once we arrived at the hospital emergency area, much to my surprise there was no one else there, and the staff took one look at me and took me through to the maternity ward. When I arrived in the observation room my waters broke. Just a trickle, like I’d wet myself. After going to the toilet I was wheeled up to the ward, and saw the midwives. Thank goodness for these amazing women, they were just amazing the entire time. Jules arrived soon after and we had a shower while the bath was filling up, then moved into the bath for some time which was pleasant, but I could feel it slowing everything down. I just had this internal voice that told me to get out of the bath.

“The way that the midwives were observing me, that they  knew Quentin and I had this! They later said that we were just a pleasure, and I don’t want to blow my own horn but the midwives and Jules said I was like a Birthing Goddess and that they were in awe of me! I felt like I was in a zone. I was so proud of myself.”

At this stage I was on the bed on all four’s reaching over the bedhead, but my arms got really sore so I moved to a floor mat on my knees and lowered the bed down with my arms on the bed. I remember saying to Jules, I’m ready to push. She and the midwife did a visual check and said that my body wasn’t quite ready, so just to breathe through the sensations through my mouth. It helped me let go of that energy, and I feel like if I had of pushed then I would have torn. I’m very grateful for that.

“On another side note, our doula was amazing, having her there was the best. Mopping my brow, getting water, liaising with the midwives and setting up the room. And such a great emotional support! It also helped me feel safe as she’s birthed babies herself and has assisted in so many labours. She has a great wisdom of the intricacies of birth, I found this incredibly reassuring. She was so loving and supportive; she was the wise woman in the room. This left Quentin to be my husband support providing the oxytocin bursts I needed in feeling safe and loved, and it also left space for Quentin to be present, to be observant and guided by me as to how he can help in that moment, and importantly to be completely in awe of what my body and I were doing, bringing our daughter into the world”

Not long after, Jules told me I was ready to bear down. I did feel a big difference in my body too, there was no breathing through that, bubs was coming! I could feel her coming down the birth path, and when the time was right I succumbed to the urge to bear down, and after a couple of big pushes her head emerged! One further push and Quentin was ready to catch her. 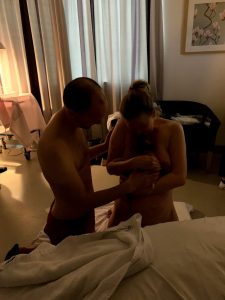 She was on my chest for 2 hours, as I couldn’t easily birth the placenta out. For the first hour we were trying everything to expel the placenta, but eventually we had the syntocinin shot but only 90% of the placenta came out. So I needed surgery to get the remainder out with a spinal block.

“At this point I had a choice- either be upset, or decide this is my path and be grateful my daughter won’t be effected by these drugs. So although it wasn’t ideal, I made peace with it pretty quick. It helped that I was on a high, smile from ear to ear, expressing to anyone within 10 feet of me that I’d just birthed my baby!!”

I was nervous about how bubs would be without me, but she slept on Quentin for the next 2.5 hours, she wasn’t bothered in her deep post birth slumber. On his way back to the recovery room to see us, the nurse advised Quentin to put our daughter in the crib so she could be wheeled through the hospital. He just said, “I’m not putting down my baby”. She advised it was hospital policy, but he flat out refused saying “I’m not putting down my child”. Just made me love him that little bit more!

“On his way to me in the recovery room, Quentin heard the screaming of other women in the hospital birthing their babies and commented that this is what people think is normal, thank goodness we did the Hypnobirthing Australia class…. I made noise for sure, but primal noises and grunting, not screaming, because I didn’t feel the need to, I wasn’t terrified of birth.”

So when I came back into the room, Quentin and my daughter were cuddling and my heart just melted! We stayed in hospital for the night, I probably would have gone home if I didn’t have surgery so we were lucky enough to get a private double room which was great.