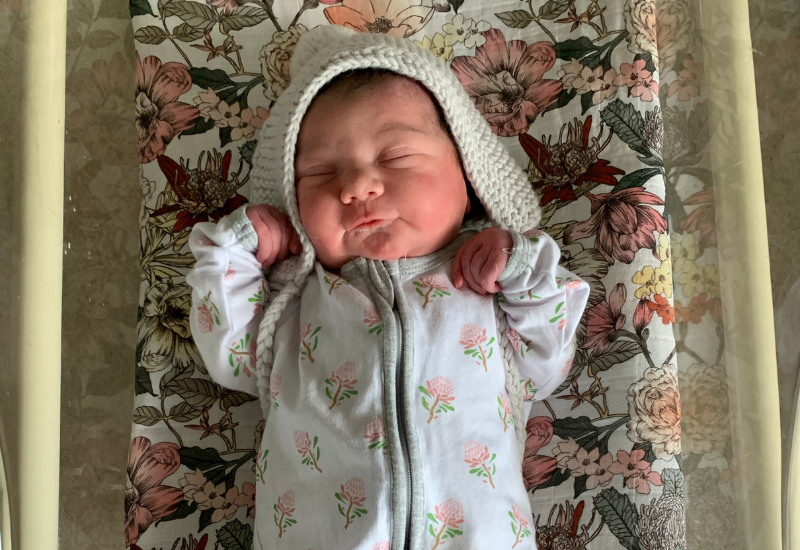 “While I did sustain some second degree tearing, this has been nothing compared to my previous birth and I am literally on cloud nine from the amazing experience we had. I can’t thank you enough for everything you taught us, I really don’t think we would’ve had such a positive experience if we hadn’t attended your course.

I truly believe the Hypnobirthing program should be provided to all pregnant women – it is that amazing!“

My waters broke spontaneously at 8:30am on Sunday the 18th of October, we had been having a slow morning watching some cartoons in bed with our 2.5 year old son. When I got out of bed and stood up I felt a slight pop followed by a small gush. I quickly went to the bathroom to discover it was most definitely my waters that had broken as it kept on flowing!

Some Braxton Hicks followed for the next few hours but nothing much else was happening. I called my mum to let her know what was happening and then we had a pancake breakfast with our little guy. My mum came to pick up our son and then we pottered around doing some final packing and preparation for when we had to leave for the hospital.

I put some Clary Sage oil into a diffuser, did acupressure points, played the Hypnobirthing tracks and tried to get a bit of rest. Around 12:30pm the Braxton Hicks started to get a bit stronger than any I’d had before and were roughly 20 minutes apart. My husband and I decided to call the hospital just to let them know what was happening and they suggested coming in to confirm it was definitely my waters that had broken and take some stats, they were happy for us to come back home provided everything looked okay.

After having some lunch we made our way into the hospital and the midwives confirmed it was my waters that had broken and took a trace on myself and baby. The doctor came in and let us know that they like to administer antibiotics 18 hours after membranes have ruptured and gave us the option of starting an induction drip to get things moving along. We declined and said we wanted to go home to see if I would go into labour on my own. She agreed to give us some oral antibiotics to take if things weren’t moving along by the time we went to bed and asked us to come back in at 8am the following morning if we weren’t back before then.

“At home we continued to try and relax a bit more as I was pretty tired and didn’t sleep much the night before. We didn’t know what kind of night we were in for so decided it would be better to conserve our energy rather than use it up trying to walk and be too active. I’m so glad I went with my gut on this one! “

We had dinner around 6pm and the slight surges I was having started to pick up a little bit but were still very inconsistent. I continued to diffuse Clary Sage Oil, do acupressure points and swapped between bouncing on the exercise ball, doing laps of the kitchen and resting on the couch while trying to watch TV. Before deciding to head to bed around 9:30pm to try and get some sleep, I had my husband assist me with a side lying release, a technique my acupuncturist had taught me to assist with pelvic pain but also getting baby into a better position.

Around 10pm while in bed trying to sleep and continuing to listen to the hypnobirthing tracks, my surges started to become more intense. I couldn’t stay lying in bed and instead had to get onto all fours and sway my hips while focusing on my breathing until they finished. At this stage the surges were lasting a minute but were only coming once every ten minutes.

“By 11:00pm I couldn’t listen to my husband snoring beside my anymore and woke him up to help get me through the surges. He used soft touch and took over timing them. Around 12:30pm I began saying that I wasn’t sure if I could do this anymore and was having uncontrollable shakes. I told my husband to call the hospital to see what they thought we should do, they asked the usual questions and said they were happy for us to come in if that’s what we wanted. “

All of a sudden after hanging up the phone and deciding to go to the hospital, my surges went from one every ten minutes to 2-3 surges in 10 minutes. I did my best to continue breathing through them as we got into the car and made the 2 minute trip down the road to the hospital. I’ve never been so thankful to live so close by! We arrived at the hospital at 1am and the surges kept coming as we walked to the entrance and then to the maternity unit, I had to stop while they were happening but was able to breathe through them okay.

Once we were in a birthing suite the midwife advised they’d like to put in a cannula due to a previous PPH with my first baby. This was by far the hardest part of my birthing experience as I had to lie on my back on the bed while they attempted to put the cannula in unsuccessfully the first time and then try again. My husband was amazing though and had set up our speaker to play the Tranquil Chambers track and continued to do soft touch while I breathed through the surges on the bed. At this point they were getting more and more intense and I remember saying I needed to get off the bed and could literally feel the baby starting to move down!

“As soon as the cannula was in I hopped up and as I sat on the edge of the bed with another surge I shouted “she’s coming!” and made my way to the toilet as the midwives tried to decipher exactly what was happening. I don’t think any of us thought I was so far along but it soon became obvious I was when I couldn’t help but make the most primal sounds as my body just took over and began bearing down – all while sitting on the toilet holding onto my husband! “

From there the midwives and my husband convinced me to get off the toilet and lean over the birthing ball instead. I used the ball to support myself and tried to relax my body through each surge. I remember hearing the midwife say we better get the doctor here, I was excited because i knew that meant I wasn’t far off having this baby!

With each surge I felt the baby coming down the birth canal, it was the most bizarre yet amazing feeling. I definitely wasn’t quiet while pushing but making sound helped and the midwives/doctor were amazing, applying warm compresses to prevent tearing and not once did they tell me to push, instead they encouraged me to slow down, take control and breathe through each surge.

“Our beautiful baby girl, Arley May was born at 2:20am and immediately passed to me for skin to skin contact. She did take a minute to start breathing but after a quick rub with a towel, she let out a big cry and all I could say was “I did it!” I couldn’t have been more proud of myself and my husband and our entire birth experience. It was very much the redeeming birth experience we hoped for after our first didn’t go as planned. I am extremely grateful for the skills we learned during the Hypnobirthing classes with Simone. I was able to envision the birth I wanted and implement the various techniques to stay calm and in control throughout my labour resulting in the positive birth I had dreamed about!”

Again, thank you so much for everything!