“I first just want to thank you once again for your guidance and course. We felt empowered and were able to make our own decisions with confidence, and we did end up having to say no to a hospital recommendation VERY early on. Not only that but Chris was so prepared and an amazing support person – he was my biggest advocate throughout the labour and birth and was able to make decisions on my behalf and set up an amazing atmosphere in the room for us. I wouldn’t have been able to do it without him in that role. So we can’t thank you enough!”

Our little bub arrived at 41+2 weeks – it’s a girl! Her name is Ashby Mae O’Donnell and she was born on 10/03/22. She kept us hanging for a while after her guess date, so we were very ready by the time she was. Very happy to share our birth story with you 🙂

Once we got past the 1st of March guess date, I started various natural induction techniques to try and get things moving. I knew bub would come when she was ready, but I was starting to get more uncomfortable and we were very ready for her to arrive. Having said that, we didn’t try anything before 40 weeks. I had been getting mild period like cramps from about week 34, but it was so on and off and never got more too intense so it may have been Braxton hicks (though it didn’t feel like tightening and it didn’t go away when I moved around… so I’m sure). Anyway at 40 weeks I started drinking raspberry leaf tea, eating dates, nipple stimulation, and I also tried acupuncture (3 sessions) and the chiro. It may be a coincidence or not, but I actually went into labour the day after the chiro visit.

In terms of how the labour progressed – I’d been getting some pelvic pressure/cramping on the night of 41+1 (09/03/22) to the point where we called the hospital and they said it may or may not be early labour so just to try and rest. Went to bed then was woken up at 1:30am (10/03/22) by a much stronger sensation. Got up to go to the toilet and my waters broke. Not a huge gush, but pretty constant once it started. It was a big surprise to have the waters break first given we knew that wasn’t that common. We called the hospital and talked about the colour and they said it sounded like I had meconium in my waters, so we were told to go to the hospital straight away. That really threw us, it wasn’t a complication we were expecting obviously so we had to be ready to make decisions about how we’d progress pretty much straight away. Contractions started straight away after the waters broke too (in hindsight the ones from the night before were early mild contractions/early labour).

We got to the hospital about 3:00am, and contractions were about 5min apart by then and getting more intense. Once there, they confirmed it was meconium in my waters and explained all the risks associated with that. They recommended us to have the syntocinon drip to get the baby out asap. They also wanted to monitor bub closely so wanted to use the CTG.

“They gave us time to think about what we wanted to do, but the midwife did make a suggestion that we could wait and see how things progress naturally (against their ‘official’ recommendation). We ended up declining the induction and asking for a few hours to see how things progressed naturally, which they were happy with. We agreed to keep the CTG monitoring going though because we wanted to know the baby was ok, we weren’t comfortable with only checking her every 30min or so on the doppler. “

We also agreed to a vaginal examination at that point (we had always intended on having one when we first got to hospital). By then it was 4:30am and I was already in active labour (4cm). I didn’t get told the dilation, but Chris did and I could tell by his voice that he was very relieved so I was comforted by that.

Another thing that happened because of the meconium was they recommended not to use the bath at all. They did end up suggesting we could use the bath for labour but they didn’t want me birthing in it, in case the baby ingested the meconium. They did run the bath, but I decided not to go in it at all because I was fairly certain once I got in there I would not want to get out.

“Over the next few hours after the examination, they pretty much left us alone, unless they needed to adjust the CTG straps. I went into the shower for a bit and then was basically in different positions on the floor mattress after that. ”

Things got more intense and I started involuntarily pushing about 8:00am. I didn’t expect that or anticipate what that would feel like – it was such a strong feeling having that urge to push. The midwives made a few comments about wanting to make sure I was fully dilated so that I wasn’t pushing with my cervix still not fully effaced, and coincidentally that was the time we agreed to check that labour was progressing naturally after saying no to the induction. So I agreed to have another exam at about 8:30am and I was fully dilated! That was a huge relief because that meant we didn’t have to make any more decisions about induction but also I didn’t need to be concerned that I was pushing on my cervix too soon. I do remember thinking to myself that my body wouldn’t start pushing by itself if it wasn’t ready!

“The involuntary pushing just got increasingly stronger after that point and I ended up in the bearing down/pushing phase from then for about 3.5 hours. Throughout most of the labour we just had one midwife who was reasonably junior but really calming and was clearly knowledgeable in hypnobirthing.”

A second midwife joined at some point in the final stage and she was really great at suggesting different positions when things started to feel like they were stalling. I moved around from all fours, leaning on the ball and the bed and on my back/side with Chris holding up my leg. I was getting so tired at points during the final phase and did have a lot of moments in my head and out loud of saying “I can’t do this anymore” but I didn’t ask for pain relief or other interventions and I think that’s because I understood what was going on in my body, plus I had Chris being my biggest cheerleader in my ear each time I doubted myself. I definitely understand the ‘ring of fire’ phrase now! After 3.5 hours or so of pushing, she was born 🙂

It was the most magical moment, and the best surprise finding out her sex! Chris cut her cord and we had skin on skin immediately which was amazing. We had on our birth preferences to try and birth the placenta naturally for an hour. I tried the birth stool and consented for the midwife to check if the placenta was sitting low at all, but it wasn’t and I wasn’t getting any cramping/bearing down feelings. So after an hour we agreed to have the syntocinon injection and the placenta came not long after that.

“During the first hour Chris also managed to have some skin to skin while we were trying a few things for the placenta, which was really lovely (he got a breast crawl!)”

I didn’t have any tearing or need any stitches. I only had two minor grazes that on day 3 when the midwife visited had virtually healed. I think that is in large part due to the fact that she took her sweet time in the pushing phase, which meant that things were stretched naturally. They also used a warm compress which I’m sure helped. Either way – I’m very happy that I didn’t have any tearing etc!

Overall, it was a really positive experience and we got almost everything on our preferences, despite the meconium curveball right at the start.

Funnily enough I completely forgot to use the TENS machine even though we’d hired one. I think the meconium distracted me and it didn’t even cross my mind.

All the midwives were amazing – they were very supportive of our birth preferences and hypnobirthing more broadly. They even put a sign on the door saying we were having a hypnobirth without us asking (we’d forgotten to do that ourselves).

They also said it was the best birth they’d been a part of for a long time, and one said that it restored their faith in having a natural birth in the hospital system 🙂 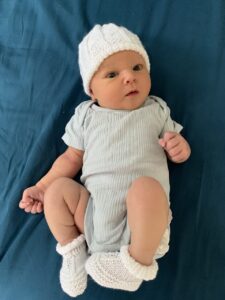 Thanks again, we recommend you to anyone who asks us!!